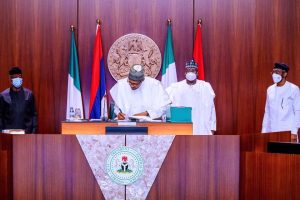 The presidency has revealed that President Muhammadu Buhari will today, Thursday, December 31, 2020, sign into law the 2021 Budget.

This was made known by the Senior Special Assistant to Buhari on Media and Publicity, Garba Shehu.

Naija News reports that those expected to be at the signing today are; Vice President Yemi Osinbajo, Senate President Ahmad Lawan, Speaker Femi Gbajabiamila of the House of Representatives, principal officers of National Assembly and chairmen of the appropriations committees of both chambers.

Senator Babajide Omoworare, Senior Special Assistant (SSA) to the President on National Assembly (Senate) and Umar El Yakub, his counterpart in the House of Representatives are expected to present the 2021 budget to Buhari.

Recall that the National Assembly before embarking on holiday had passed the N13.58tn budget for the next fiscal year.

The current government over the years has shared its desire to restore the country’s budget to January to December cycle.

The desire was achieved with the 2020 budget which was signed into law by President Buhari on December 17, 2019.

The passed budget Bill by the National Assembly also provided the sum of N3.3tn for debt servicing.