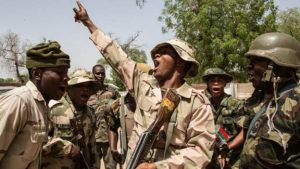 Some aggrieved soldiers of the Nigerian Army have lamented that the military is owing them uniform and boot allowances and still wants to make deductions from their salary in the name of a housing scheme.

The soldiers, who spoke to SaharaReporters on Saturday, said the official statement of the Nigerian Army that the soldiers were duly consulted on the scheme was totally false.

They also said that it was a lie that the Chief of Army Staff, Lt Gen Ibrahim Attahiru, met the scheme in the pipeline when he assumed office in January 2021, adding that the controversial housing scheme is his brainchild.

Some of the soldiers countered the army’s position that the housing scheme was an innovation to swindle the lower ranks of their meagre salary.

“This is a welfare housing policy proposed by the Chief of Army Staff for the other rank cadre which is to be compulsory and monthly deductions will be made from every soldier’s salary. No soldier was consulted on this. The officer cadre was exempted; besides, most of us have houses of our own. Our scarce skills allowance is N100,000 every month but we are short paid,” one of them said.

“There was no housing scheme in the pipeline that the new Chief of Army Staff met when he assumed office. No soldier was consulted, and questionnaires were not shared to sensitise or sample the opinion of troops.

“Our salary has not been increased; we still buy uniforms and boots for ourselves; we live in dilapidated buildings. We’ve not been paid a uniform allowance and boot allowance. You are deployed to a company, the company pays the sum of N150,000, but the Commanding Officer will pay each soldier N30,000,” another soldier said.

Recall that the soldiers had on Thursday rejected an alleged plan by the leadership of the Nigerian Army to make some monthly deductions from their salary.

According to the soldiers in an open letter written to President Muhammadu Buhari, there is a plan to deduct some amounts of money from their salaries on a monthly basis for a proposed Nigerian Army Welfare Housing Scheme (NAWHS).

They however described the scheme as a fraud and an attempt by the Army authorities to further impoverish them while they continue to live large.

They want President Buhari and the National Assembly to prevail on the Chief of Army Staff, Lt-Gen Ibrahim Attahiru to drop the proposed scheme and if he wants to continue with the plan, it should be optional and not compulsory.

In a reaction by the Nigerian Army’s Director of Public Relations, Brig-Gen Mohammed Yerima, the army authorities had claimed that the soldiers were duly consulted.

“The current Chief of Army Staff met an Army Housing Scheme in the pipeline and constituted a committee to understudy its feasibility and desirability. The committee subsequently designed the questionnaire for soldiers to bare their minds on the scheme and ascertain those interested in it. It was still at this stage of administering the questionnaire to soldiers that agent provocateurs seized the moment to demonise the scheme with toxic narratives,” the army’s spokesman had stated.