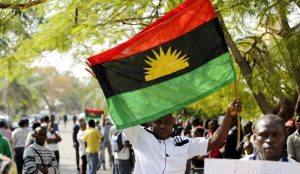 President Muhammadu Buhari has been advised by the Coalition of Northern Groups, CNG, to allow Igbos to have the Republic of Biafra so that there can be peace in the country.

Members of the Indigenous People of Biafra at different times have been accused of wreaking havoc across the South East region.

Recall that Buhari while receiving the Chairman of the Independent National Electoral Commission, Prof Yakubu Mahmood, and electoral commissioners at the State House in Abuja on Tuesday, had said those attacking INEC facilities in the South East will be ‘treated in the language they understand.

CNG while reacting to the President’s comment in a statement by its spokesman, Abdul-Azeez Sulaiman, said the presidential tweet merely amounts to an admission of failure and loss of capacity.

The group wrote, “We find it ridiculous that most parts of the President’s tweet concentrated more attention to infrastructure than on the lives of citizens that are wasted daily with virtually no response from the authorities.

“The President’s revelation that most of those involved in the current agitation for secession are those who have not witnessed the 1967 civil war is a vindication of our position that the only reasonable option to ensure a more secure future is for the Igbo to be allowed to have their wish for a Biafran nation.

“The fact that the strength of the Igbo agitation rests on youth who are mainly below the ages of 50, with diseased mindset, encouraged by their political, cultural and religious leaders to take up arms against the Nigerian state and Northerners, has rendered the nation’s unity negotiable.

“It is therefore unreasonable for those older Nigerians who are mostly above 70 to insist that the unity of Nigeria is sacrosanct whereas the people executing the dangerous Southeast secession agenda are almost entirely below 50.

“It is time for the Nigerian state and all stakeholders to wake to the reality that the only remaining option to avoid a civil war is for the Igbo to be allowed to have the Biafra they have used intermittently for decades to destabilize the nation and deny peace to other components of the country,” Sulaiman said in the statement.

CNG advise the people of the North across the country to remain calm and resolute, with the assurance that they are taking steps to ensure the actualization of Biafra so the rest of the country would know peace.

“We hereby make an allowance of the next 30 days to see how Buhari would make true his threat to deal with insurgency, banditry and above all, the greater threat posed by IPOB or how he will handle the entire Igbo leadership that openly back and embolden them,” he said.