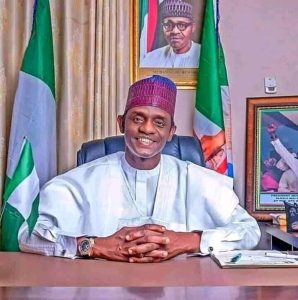 The All Progressives Congress (APC) has set up a constitution amendment committee to review its constitution to accommodate the Caretaker/ Extraordinary Convention Planning Committee.

Naija News reports that the Caretaker Committee was set up last year by the National Executive Committee (NEC) of the party after sacking of the National Working Committee (NWC) led by the former governor of Edo State, Comrade Adams Oshiomhole.

In order to make the committee legal, Chairman of the Committee and governor of Yobe State, Mai Mala Buni inaugurated the eight-member constitution review committee.

While inaugurating the committee, Buni, represented by the Secretary, Senator John Akpan- Udoedehe, said the review became necessary in order to reflect the current trends and aspirations of the owners of the party.

He said: “At the formation stages, parties will often adopt the minimum requirements needed to secure registration, but as a pro-people party, the APC under the leadership of Mai Mala Buni believes that in rebuilding the party, there must be reforms that reflect the current trends and aspirations of the owners of the party – that is the people, the masses.

“Of course, no constitution is perfect and the law itself is not a finished product, but a work in progress. Our party has grown quite large in the last few years and is poised to become the largest party in the continent with the on-going membership registration and revalidation exercise, hence we must have a set of laws that is near-perfect, by filling the lacunas! Therefore, your work is well set-out for you.”

Speaking after their inauguration, chairman of the constitution review committee, Prof. Tahiti Mamman, said the review of the party’s constitution became necessary in order to make the party stronger.

“Of course, a constitution of a political party like that of a country is both a legal and political instrument. It can never address all the issues at all times. Much of its success depends on the operators imbibing the spirit of democracy, good faith, and a sense of self-control.

“However, a vibrant constitutional foundation is fundamental for certainty and clarity of power, functions, processes, and privileges in the institution.”