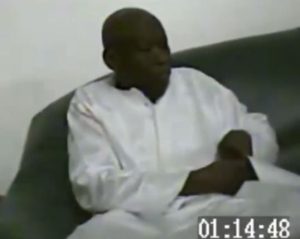 The Publisher of Daily Nigerian, Jaafar Jaafar, who released a video showing the Governor of Kano State, Abdullahi Ganduje, stuffing dollars in his pockets, has cried out that the governor should be held responsible if anything happens to him.

Jaafar made these claims days after the Governor granted an interview on the video which showed him collecting dollars.

Ganduje during an interview on Friday with the British Broadcasting Corporation Hausa noted that the government was investigating the video and will deal with the people behind the release.

The journalist who feels threatened wrote a petition to the Inspector General of Adamu, Mohammed Adamu, through his counsel, Barrister Abdullahi Gumel.

Jaafar who spoke through his lawyer, noted that although Ganduje is a sitting governor and a member of the ruling party, the IGP would handle the matter professionally, diligently and speedily.

The petition partly reads, “That our client (Jaafar Jaafar) has de facto been made persona non-grata in his home state and lives in perpetual fear in the rest of the country including Abuja. Thus, he and his family have essentially been hiding for fear of their lives.”

“As if the above was not enough, Mr Ganduje recently indicated that he and his supporters are scheming underground to ‘deal with our client. Ganduje made this statement on a popular BBC Hausa programme, “A Fada A Cika”, which aired on March 19, 2021. He insisted that he would not reveal their plans despite an opportunity to clarify what he meant.”

“It is our client’s and our firm belief that by the above statement, Ganduje clearly said that he and his supporters are scheming to harm our client. This is also an approval or ratification of his supporter’s past stalking, harassment and threats to our client. Importantly, Ganduje is by this statement instigating, inciting, aiding, abetting and procuring his supporters (especially those he is working secretly with) to harm our client, his family and property. This has caused our client an unprecedented fear of violence and has alarmed and distressed him.”

“Sir, the above facts must be seen in the contest of the fact that Mr Ganduje, being a sitting Governor and member of the ruling party, is one of the most powerful politicians in Nigeria. He has thousands of diehard supporters, including those directly and indirectly employed by him. Thus, his words carry weight in the minds of thousands of supporters across Nigeria who may be incited to attack our client.”

“Sir, we believe you will agree with us that journalism and whistle-blowing are not a crime. It is our clients’ belief that the footages they published, which they firmly stand to this day, are genuine and the accompanying stories are the truthful and fair account of the circumstances surrounding the footages.”

“It is against this backdrop that we write to you urging you intervene to (a) investigate what Mr Ganduje is scheming, with whom and how and halt same; (b) protect our clients from further harm, threats and harassment from Ganduje and his supporters; and (c) get Mr Ganduje to issue a statement calling on his supporters and cronies to stop threatening and harassing our clients.”

“In view of the foregoing, the governor should be held responsible if anything happened to our client.”