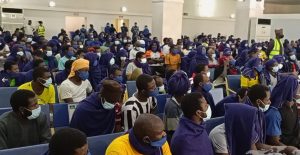 420 Nigerians are expected back into the country from Saudi Arabia on Wednesday after they were stranded in the Islamic country.

According to The Nation, the returnees are to arrive via the Nnamdi Azikiwe International Airport Abuja from Jeddah, Kingdom of Saudi Arabia.

The report added that the returnees are expected in the country at about 10:30 am via Saudi Arabian airlines.

The returnees on arrival will be quarantined at the FCT Hajj camp for a period of fourteen (14) days in line with established COVID-19 protocols.

Thereafter, the Ministry will facilitate their movement to their respective home destinations.

Naija News had reported that 802 Nigerians who were stranded in Saudi Arabia were evacuated back to Nigeria last week.

Meanwhile, the Nigerian Army has reacted to the allegation that six soldiers of Igbo extraction were executed based on orders given by the now-former Chief of Army Staff (COAS), Tukur Buratai.

A report on Tuesday based on a statement that originated from a group of human rights activists had claimed that the soldiers were executed secretly.

The group claimed it was informed of the development by an international human rights lawyer, Barr E.R. Okoroafor, who reportedly alleged he was denied the right to defend his client at the secret trial.

The coalition claimed in its report that the soldiers, identified as Prince Ukwuoma, son of a traditional ruler; Ebube Isaiah, Amos Azubuike, Ekene Ebere, Moses Anyim, and Godwin Uchendu were all killed on the 25th of January, 2021.

It added that they were accused of complicity in a missing weapons case that was made at Abacha Barracks involving a total of twelve soldiers and a senior colonel.

It alleged that others involved in guarding the armoury at the barrack were absolved of the blame while the six soldiers were sent for court-martial, denied representation based on what he (Barr Okorafor) claimed as military authorities telling him a civilian lawyer can’t represent them in the case.

The group accused the military authorities of carrying out ethnic cleansing.