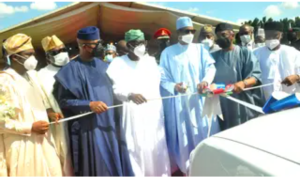 There was drama at the Police College, Lagos State, on Thursday as police operatives prevented two chiefs that accompanied the Oba of Lagos, Rilwan Akiolu, from accessing the arena where President Muhammadu Buhari handed over equipment to security agencies.

It was gathered that only one of the chiefs was granted access into the venue where the equipment was handed over to the state police command.

The Oba of Lagos was an Assistant Inspector-General before he retired from the police.

However, the daughter of the National Leader of the All Progressives Congress, Folashade Tinubu-Ojo, who happens to be the Iyaloja-General of Lagos, was granted access to the venue in the company of three persons who were all allowed into the venue.

The former Governor of Lagos was, however, absent at the event.

They were donated by the state government.

Speaking at the event, Buhari charged the Inspector-General of Police to rebuild confidence in his men, who have been demoralised as a result of a series of attacks since the #EndSARS protests.

“I charge the Inspector-General to leave no stone unturned in rebuilding the morale of his officers and men, especially in the aftermath of the mindless violence associated with the EndSARS protests, as well as the recent spate of attacks on Police Stations in some parts of the country.

“A nation that turns its Police personnel and infrastructure into targets of violence and destruction is a nation on the path of self-destruction. We will act firmly and decisively against many persons fomenting or carrying out attacks on our Police Force and other security personnel.

“As Commander-in-chief, my primary responsibility remains the security of the country and the safety of all citizens. Despite the many challenges we are facing, I want Nigerians to rest assured that we will secure this country. We will secure our infrastructure, our highways, our communities, and our forests, and we will secure the lives of our people,” the president said.