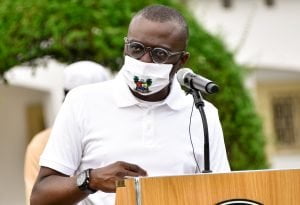 The Governor of Lagos State, Babajide Sanwo-Olu, on Thursday had a meeting with Nigeria President, Muhammadu Buhari at the Presidential Villa, Abuja.

Gov. Sanwo-Olu while speaking with State House Correspondents disclosed how the Lagos State government is managing the second wave of COVID-19 in the state.

The Lagos Governor also revealed how it’s administration is trying to rebuild the infrastructure destroyed during the #EndSARS protests.

He further stated that Lagos State remains the epicentre of the virus while noting that the second wave appears more infectious than the first.

According to him, more patients in the state are in need of oxygen, hence the decision of his government to build 10 oxygen tents.

The governor said, “On COVID-19, it is actually a very serious case. We have all said it, we are in the second wave and incidentally, the second wave seems to be a bit more infectious than the first one, I mean the rate of infection and the number of people that we have seen. We still remain the epicentre, so what we have done is, we never stopped building capacity.”

“One of the things that we are doing now is communication and we are taking it to the grassroots to let people know that they need to take full responsibility and know that even for their loved ones, they need to be real with themselves and know that COVID-19 is real, it is with us and it is not just something playing in their heads.”

“We have seen, unfortunately, the fatality rate around the country, even in Lagos. One of the things we have realised is that a lot more people require oxygen attention, they need additional breathing aid, so we have started building what we call oxygen tents.”

“We are building about 10 of such facilities, we have commissioned about four or five of them and we are also building proper oxygen plants, additional oxygen plants in the state so that we can meet the respiratory requirements.”

Speaking to State House correspondents on Thursday after meeting with President Muhammadu Buhari at the Presidential Villa, Abuja, Sanwo-Olu said the rebuilding process would take a while to finish.

The governor noted that his administration is also assisting affected small businesses to rebuild through the Lagos State Employment Trust Fund.