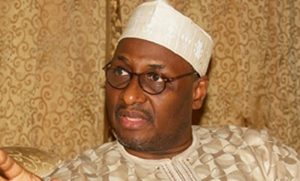 Former Governor of Bauchi State and erstwhile National Chairman of the Peoples Democratic Party Dr. Ahmadu Adamu Mu’azu has returned to the party.

Naija News reports that Mu’azu rejoined the party at the ongoing North East Zonal Congress of the PDP.

Mu’azu had defected to the ruling All Progressives (APC) shortly before the 2019 general elections after falling out with some members and governors elected under the party.

During his time as the PDP chairman, Muazu as fondly called the ‘Game Changer saw the party through the 2015 general election in which its presidential candidate, Goodluck Jonathan was defeated by Muhammadu Buhari.

The two PDP leaders have been at loggerheads over the control of the party structure in the southwest.

Both Fayose and Makinde have also nominated different candidates for the forthcoming zonal congress of the party in the South-West, leading to fears that parallel congresses may hold in the region.

The actions of both leaders have further polarized the party in the region leading to the emergence of factions within the PDP in the southwest.

Perhaps worried by the developments, former Osun State Governor, Prince Olagunsoye Oyinlola reportedly convened a peace meeting to resolve the crisis but Fayose has now come out to clearly declare that he won’t attend the meeting.

With both leaders and their supporters spoiling for war in the battle for political supremacy, Fayose’s supporters, have alleged that any meeting called by Oyinlola “is self-serving and for personal gains.”

Personally, Fayose also tweeted on the purpoted peace meeting, saying: “My attention has been drawn to a publication that I will attend a reconciliation meeting by former Governor Olagunsoye Oyinlola, today (Friday).

“Let me state clearly that I have no business with Prince Oyinlola’s so-called reconciliation.”

Naija News reports that both Fayose and Makinde who are locked in a battle for the soul of the PDP in the southwest have on several occasions, engaged in a battle of words and wits on social media.