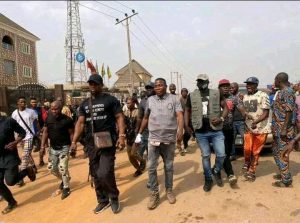 Governor Dapo Abiodun-led government has denied the report that it reached out to Yoruba activist, Sunday Adeyemo, popularly known as Sunday Igboho to end herdsmen killings.

Recall that soldiers accompanied herdsmen to villages and communities in Ketu where they flogged indigenes for not allowing herdsmen graze on their farmland.

The Commissioner for Information and Strategy, Abdulwaheed Odusile, in a statement, said: “In the interview, Hon Hazzan had said that the state government, in its usual inclusive approach to governance, would continue to work with all the stakeholders, both within and outside the state, to ensure the security of lives and properties.”

“Sadly, however, this statement was disingenuously twisted to mean that the State had invited Adeyemo to help curb insecurity. This is regrettable and totally misleading.”

“Prince Dapo Abiodun’s administration, since inception, has been known to be inclusive in its approach, always collaborating and engaging with a wide range of stakeholders.”

“Security is no exception, resulting in the achievement of the enviable status and recognition as the most secure state in the country by many organisations.”

“For the avoidance of doubt, Ogun State Government will continue to deploy all constitutionally sanctioned means to fight crimes and criminals in the state, including working with institutions that the constitution and other statutes have saddled with the responsibility of protection of lives and properties.”

“At all times, the Government will ensure that all security agencies and indeed all stakeholders operate within the ambit of the law and will neither welcome nor endorse any initiative that amounts to self-help or is outside the contemplation of the constitution, which is the ground norm binding on all governments and persons in the country.”