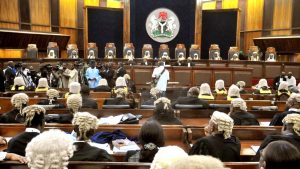 The Supreme Court on Thursday clarified the petition written by the All Progressives Congress (APC) against some Supreme Court judges concerning the lingering Imo North senatorial election legal tussle.

A statement by the Supreme Court’s Director of Press and Information, Festus Akande, said Abdu Aboki, a member of the five-man panel hearing a case concerning the senatorial election, was not named in the petition announced by another judge of the court on Tuesday.

Justice Dattijo Muhammad, leading the five-man panel of the apex court, had announced at proceedings that the APC, in its petition, accused him and two of his other colleagues of holding a secret meeting with top officials of rival Peoples Democratic Party (PDP) to subvert justice.

He, who denied the allegation, gave the names of the two other colleagues accused in the APC’s petition to be Helen Ogunwumiju and Abdu Aboki.

But the Supreme Court said there was a need to keep the record straight and admonish litigants, particularly politicians on the need to be decent their conducts.

We need to state that the news that occupied strategic space in the media yesterday, Wednesday 24th March, 2021, which emanated from a petition purportedly written by the acting chair of the All Progressives Congress and Governor of Yobe State, Alhaji Mai-Mala Buni, against three Justices of the Supreme Court never mentioned the name of Hon. Justice Abdu Aboki even though he is on the panel of five Justices hearing the appeal that resulted from the Imo North Senatorial District Bye Election conducted on 5th October, 2020. The information in circulation is not only wrong but equally misleading.

It is pertinent to state that even though the acting chairperson of the APC, Alhaji Mai-Mala Buni, has issued a disclaimer of the malicious and baseless petition, there is still need to keep record straight and also to admonish litigants, particularly politicians on the need to be guided by good conscience and decency in all their conducts especially when a case is before a Court of competent jurisdiction, as such unguided disposition could send out the wrong signals.

The Honourable Justices of the Supreme Court who have always been working assiduously to promote the rule of law, impartial and seamless dispensation of justice don’t deserve such orchestrated mudslinging, to say the least.”