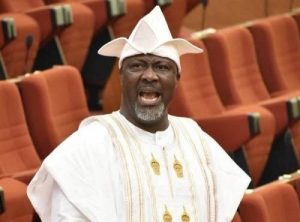 Former Kogi West Senator, Dino Melaye has called out President Muhammadu Buhari, telling him to address Nigerians directly over the growing insecurity in the country.

This is as he submitted that it is not proper for the President to always speak to the people through statements issued by his media aides, Femi Adesina and Garba Shehu.

Melaye made the submission during an interview with Africa Independent Television (AIT) monitored by Naija News correspondent.

According to the former Senator, the growing insecurity in the country is worrisome but the President is absent and unavailable.

He added that the security challenges been experienced in the country can be traced back to the failure of the current leadership in the country and if President Buhari is incapable of taking action, he should simply resign.

The former lawmaker also lashed out at the current National Assembly leadership, lamenting that they have made themselves tools in the hands of the executive and unable to fulfil their constitutional roles.

He said: “President Buhari needs to speak to Nigerians directly, he needs to communicate with the media. Our President is absent, and this has negative concomitant effects on the war against insecurity in the country.

“It is very pathetic but our President is not available. All we hear is presidency says; we didn’t vote for Garba Shehu or Femi Adesina.

“All our security challenges boils down to leadership failure. This man has shown more than enough evidence that he has no capacity to run this country.

“It is evident in the National Assembly’s decision not to impeach Buhari despite the array of insecurity and gross display of incompetence by this government.”

In other news, the Minister of Justice and Attorney-General of the Federation, Abubakar Malami has declared that the federal government will prosecute some prominent Nigerians for sponsoring Boko Haram and other criminals in the country.

Malami made the revelation on Friday while answering questions from state house correspondents.

He noted that those to be prosecuted are those found to be culpable in providing fiance to terrorists based on far-reaching investigations.