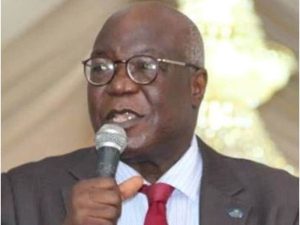 Former Vice-Chancellor of the University of Lagos (UNILAG), Professor Oyewusi Ibidapo-Obe is dead.

Naija News gathered Prof. Ibidapo-Obe died on Sunday afternoon at the age of 71.

The death of the former UNILAG VC was announced in a statement by the Chairman of the Academic Staff Union of Universities, UNILAG branch, Dr Dele Ashiru.

“Yes, he is dead. We got the sad news this evening. He is a distinguished scholar, a seasoned university administrator whose death remains a very big loss to the Nigerian university system and indeed the Nigerian society,” he said.

Also, the Registrar and Secretary to Council, First Technical University, Ibadan, Olayinka O. Balogun confirmed the passing away of the scholar.

Balogun said in the statement: “With heavy heart, and submission to the will of God I write to inform Council members of the transition to glory of Professor Oye Ibidapo-Obe, the Pro-Chancellor and Chairman of Council, First Technical University, Ibadan which occurred today.

“I pray for the repose of the soul of the departed.”

Some reports have it that he died of covid-19 complications.

Professor Ibidapo-Obe, was born on July 5, 1949. He was the UNILAG VC between 2000 and 2007 and also the Pro-Chancellor of The Technical University, Ibadan.

Meanwhile, the family and friends of Fatima Hassan Fari were thrown into mourning on Saturday, January 2, 2021, after she died on her wedding day in Funtua Local Government Area of Katsina State.

Information gathered revealed that Fatima died at 7:am on Saturday, three hours to her wedding slated for 10:am.

The deceased was buried at 2:pm the same day, according to Islamic rites.