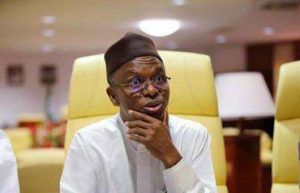 A former Speaker of the Kaduna State House of Assembly, Aminu Shagali has alleged that some retrogressive forces are bent on derailing the administration of Governor Nasir El-Rufai.

The lawmaker who addressed newsmen on Sunday, argued that some of those bent on mischief are even party members who are not pleased with the actions of the governor.

He, therefore, urged the people of the state to rally round the governor and save him from these “retrogressive forces” who are scheming to destroy the foundation laid by El-Rufai.

He said: “Sadly, given the current signs, the picture is fraught with uncertainty, and the foundation so masterfully laid is now under threat, and about to be destroyed on the altar of some retrogressive forces.”

“It is on this note that I appeal to the people of Kaduna State, and especially members of the All Progressives Congress to extend genuine solidarity to the Governor and save our State from these retrogressive forces.

“We must come together, reason together and strive together to stand by the governor. These forces will not hold back; they are relentless in the wild pursuit of their agenda and can only be subdued by a strong force for common good.”

Shagali added that El-Rufai has laid a solid foundation for progress and development in Kaduna State but some political actors through “unwarranted upheaval and political disruption” ahead of 2023 are becoming a threat to the foundation laid, therefore urging the people of the state “to come together, reason together and strive together to stand by the governor”.

“As a serving member and immediate past Speaker of the Kaduna State House of Assembly, I have followed with deep concern the recent political developments in Kaduna State,” he said.

“This can be seen in the reform of critical sectors such as education, healthcare, and security.

“He has also led an economic rebirth leading to an unprecedented flow of investments into the State, and not least, the ongoing Kaduna, Zaria and Kafanchan urban renewal projects.”

Meanwhile, a former governor of Adamawa State, Ahmad Bala Ngillari has said the opposition Peoples Democratic Party (PDP) is dead and has no future in Nigeria.

Ngilari made the remarks at a stakeholder meeting of the All Progressives Congress in Yola on Saturday.