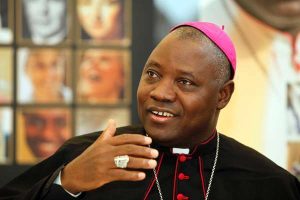 Catholic Archbishop of Abuja, Ignatius Kaigama, on Sunday, noted that elites in Nigeria have failed the country in all sectors.

The cleric stated this during his homily at St. Fabian’s Parish, Efab-Jabi in Abuja.

According to Kaigama, issues affecting the country had been made worse by the poor performance of political office holders who have failed to tackle injustice and nepotism in the country.

Kaigama stated that many elites in the country must acknowledge the depth of pain, sadness and lack of progress their decisions have caused the nation and repent of their sins.

He said, “We must admit that we have all sinned and fallen short of the glory of God and the ideals of genuine patriotism to build a nation of our dreams.”

“We must ask the question, ‘Why are things not working well despite the enormous blessings of God upon Nigeria?’ Until we desist from greed, injustice, discrimination, myopic view of religion, parochial ethnic interests instead of the common good, political insensitivity and the tendency to surreptitiously corner our common patrimony for the benefit of a few, we will continue dancing dangerously on the precipice.”

The cleric further stated that the country is suffering from hunger, poverty, and general insecurity.

Kaigama while making reference to a biblical story of the ancient serpent that was erected by Moses in the desert after Israel’s sin of rebellion against God, which was punished with the bites of fiery serpents, the Archbishop said,

“Like the Israelites, Nigerians in this journey of life have been badly bitten; we have been wounded by our human passions and inclinations, battered by our concupiscence, and propensity to become inhuman to one another on account of religion, ethnicity and politics.”

“In the midst of the ‘snake bites’ of hunger, poverty, terrorism, banditry, kidnapping, etc., which has left us almost helpless, we must raise our eyes in faith to our Lord God.”

“Like Nicodemus, who was a leading Jew of great wealth and position, but wanted enlightenment from Jesus, so must all our men of influence and power in our country genuinely seek God’s face.”