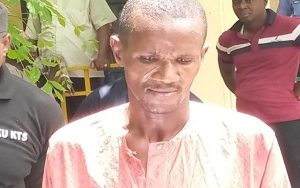 The Katsina Police Command has arrested a notorious arm supplier to bandits, alongside four of his gang members.

The state Police Public Relations Officer, SP Gambo Isah, made this known on Friday at the Police Command Headquarters, while briefing newsmen on the recent achievements made in the ongoing onslaught against banditry and other crimes in the state.

Isah noted that the police in the state arrested Ibrahim Abdullahi, who specialized in supplying guns to bandits’ camps in different parts of the country,

Isah said during interrogation, the ring leader, Ibrahim Abdullahi, confessed to being a gunrunner and that they have taken six AK- 47 rifles to one notorious bandits’ leader named: Tukur Rabiu, alias “NASHARME” at Rijana Forest, along Kaduna – Abuja road and collected the said amount in return.

He said: “A team of Police Mobile Personnel, on patrol along Tsaskiya – Ummadau Road, Safana LGA of Katsina State accosted Ibrahim Abdullahi, 40 years, Tukur Musa, 35years, Abubakar Ibrahim, 21years and Rabi’u Hamisu, 19years, on motorbikes, suspected to be owned by bandits. In the course of an investigation, the team leader confessed that he was being paid the sum of N100,00 per rifle.

The spokesman also disclosed another arrest was made during a bandit operation where the bandits in their numbers, riding on motorbikes, shooting sporadically with AK- 47 rifles, attacked Tinya village, Batsari LGA of Katsina state and rustled some domestic animals.

He said: “A team of Policemen in collaboration with a vigilante group chased after the hoodlums, engaged them into a fierce gun duel, killed one of the bandits, and recovered one AK- 47 rifle. The scene was immediately scanned by the gallant officers who successfully recovered 12 cows and 11 sheep, rustled by the bandits.”