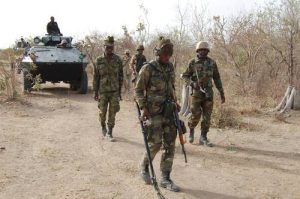 Troops of the Operation Sahel Sanity have eliminated 10 bandits during recent operations in Katsina State.

One soldier, however, died while two others were wounded as confirmed to newsmen on Tuesday in a statement by the Acting Director, Defence Media Operations, Brigadier General Bernard Onyeuko.

He added that the wounded soldiers are responding well to treatment at the hospital.

According to the acting defence spokesperson, the troops also arrested two associates assisting the bandits, and recovered some weapons during the operations.

The statement reads; “On 10 January 2021, troops deployed at Sabon Layi while clearing bandits enclaves around Maigora general area in Faskari LGA of Katsina State, came in contact with bandits at Unguwar Rimi, leading to a fierce gun battle.

“The troops were swiftly reinforced by another team from Faskari and supported by Helicopter Gunship delivering a lethal blow to the criminals thereby forcing the bandits to withdraw in disarray into the forest due to troops’ superior firepower.

”During the exploitation phase of the operation, 5 bodies of neutralized bandits were found while several others were suspected to escape with gunshot wounds as indicated by bloodstains on their escape route. Regrettably, one brave soldier paid the supreme price while 2 others sustained minor injuries during the encounter. The wounded soldiers are in stable condition and currently responding to treatment in a military medical facility.”

In another operation, Brigadier General Onyeuko also disclosed that the troops on January 2, 2021, killed five bandits at Garin Garus in Jibiya Local Government Area, while further exploitation in the area led to the recovery of 3 AK-47 rifles and 2 AK 47 Rifle magazines loaded with 18 rounds of 7.62 mm Special ammunition.

Meanwhile, the Police Command in Yobe State has confirmed it has detained a man in custody for alleged involvement in the death of an 18-year-old girl during a suspected sex romp in the Yobe State government lodge.

The Police revealed that a man, identified as Dr. Albash with whom the girl was in the room before she died is already in detention.

The Yobe State Police spokesperson, Abdulkareem Dungus said Albash is being held for suspected homicide, adding that the man who claims to be a staff of the Ministry of Police Affairs reported the case himself at the ‘B’ Division in Damaturu, the State capital.

Dungus narrated that according to the suspect, the girl was brought to him by his friends on the night of January 6, 2021 around 8pm in the Government Lodge in Damaturu.