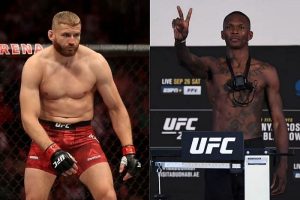 Nigerian mixed martial artist, Israel Adesanya has opened up on his defeat to Jan Blachowicz in their UFC 259 light heavyweight championship clash.

It will be recalled that Adesanya suffered his first professional defeat on Sunday morning in the hands of his Polish opponent as all the judges gave a unanimous victory to Blacchowicz.

Speaking after the fight, 31-year-old Adesanya told UFC on BT Sport by the ringside that he didn’t sleep well before the fight.

He added that though he expected to win, but he would pick himself up and get ready fr the next fight after his first professional loss.

“No, not exactly because I thought I was going to win and you know, I couldn’t sleep last night and instead of doing wines I was doing lines just to stay up.

“They got me one of these (bottle of wine) and I probably should have had it maybe I would have slept better. “Yes it didn’t go the way I wanted it but dare to be great, you know the critics are on the sidelines but I am the one putting my life on the line,” he said.

Israel Adesanya had intended to beat Blachowicz to become the fifth fighter in UFC history to become a two-weight champion simultaneously.

The Nigerian had stepped into the octagon against Jan Blachowicz, the light-heavyweight title-holder, in a bid to add to his middleweight championship honours.

Adesanya has made a career of trashing reputations, his speed, power, and movement combining to build an unbeaten 20-0 record.

Adesanya, aka “Stylebender”, would have joined Conor McGregor, Daniel Cormier, Amanda Nunes and Henry Cejudo as one of just five fighters in UFC history to hold titles in two divisions simultaneously if he had defeated Blachowicz.