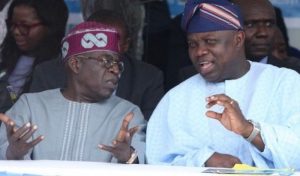 The National leader of the All Progressives Congress (APC) Asiwaju Bola Tinubu has blamed poor leadership abilities for the decision not to support Akinwumi Ambode for a second term as Lagos State Governor.

Tinubu further disclosed that the drift between Ambode’s leadership and the vision for Lagos State became noticeable between 2017-2018.

The APC National leader said this on Friday at a ceremony to commission a flyover bridge at Pen Cinema, which was started by the Ambode’s administration but completed by the Babajide Sanwo-Olu administration.

Tinubu added that the errors noticed by political leaders in the state is what led to the decision to jettison Ambode and bring Governor Babajide Sanwo-Olu and Obafemi Hamzat, on board.

According to the APC leader, though they were not sure of what the performance of Sanwo-Olu and Hamzat would be, the two leaders have so far proven their worth despite the prevailing challenges.

He commended the Sanwo-Olu administration for steering the state back in the right direction, describing him and his team as “great performers and doers”.

Meanwhile, as earlier reported by Naija News, Tinubu also warned the youths against the destruction of properties and infrastructure in the state.

Recall that during the #EndSARS Protest, some hoodlums attacked and set ablaze two media organizations, Television Continental (TVC) and The Nation Newspapers, reportedly owned by the former governor.

Speaking during the inauguration of the Agege Pen-Cinema Bridge in Lagos State on Friday, Tinubu urged youths to shun violence and embrace dialogue when communicating their grievances to the government.

He said, “Don’t copy vagabonds and those who are into thuggery. There is no development if there is no peace. We must encourage peace. The government will ensure that you get the right education. Education is an investment in your future.

“Destruction and disruption will not help you to reach the destination you desire to reach. We will support your aspirations but help the state, ensure peace in our state and country.”