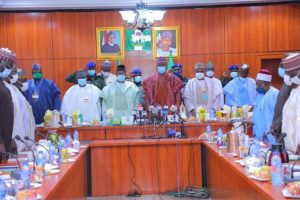 The Borno governor stated this when he led the North-East Governors to perform the groundbreaking ceremony for the reconstruction and upgrading of the Bauchi State Government House on Thursday.

According to Zulum, the Bauchi governor has been refusing to dump the PDP for the APC.

He however expressed optimism that Bala Mohammed would join the ruling party soon.

“The only quarrel that I am having with my colleague, the Governor of Bauchi State is his refusal to come into the APC.

“But inshallah, very soon, he will join us. He’ll join the Progressives. I am here to support him.”

North-East Governors have been in Bauchi State since Wednesday for their 4th Zonal meeting hosted by the state.

Those in attendance were the host Governor, Bala Mohammed, Governor Inuwa Yahaya of Gombe, Governor Umaru Fintiri of Adamawa, and Governor Babagana Zulum of Borno.